For part 3, I'll dive down deep with some of the ideas presented at PaleoFx 2015 and my key take awyas and opinion of some of the topics. The  Paleo  community is a variety of people and ideas. I like that. Because we all have different needs at different ages and of course different biology.

Each place I went was an opportunity to talk to people who were friendly, happy, and healthier than we were before. So great to share our stories and experiences.

There were a lot of people just like me- who's health and wellness were and are better eating Paleo. None of us gave a hoot about low carb, high carb, but we cared greatly about :

1. Feeling better ourselves, the illnesses that are gone by eating grain free & low processed foods.
2. Sharing our stories of how we arrived.
3. Sharing what worked for us, what didn't and why.
4. Sharing our favorite speakers, messages, books, strategies- eating, work out, life.
5. Enjoying our time in the conference, eating out, and exploring Austin.

Most awesome of all were my PaleoFx 2015 Roommates, Diana and Janelle.

Diana has attended PaleoFX and AHS before several times. She knows a lot of the speakers and is an extrovert. She asks a lot of questions, doesn't hesitate to ask for what she wants. It was so, so awesome to meet her and to be introduced to folks that I would not have meant otherwise . It was so easy to talk to Diana. Loved, loved, loved meeting her and being at Paleo Fx with her.

Diana could also advise us on exactly how long it took to walk from place to place and we took several awesome trips to the biggest Whole Foods I will likely ever be in the rest of my life.

Janelle was new to PaleoFx like I was. She is also a budding life coach. And good at it, too! I enjoyed chatting with her. Janelle took advantage of the Fit Score testing at Paleo Fx. So proud of her for performing all the tests available to her. I admired that a lot. And Janelle is so, so easy to talk to. I look forward to following Janelle along on her life coaching and next steps in her life. Follow her on Instagram, too!  Janelle has a blog also, One Bite at a Time, A Journey of Clean Eating.


I've got to just say, I hit the jackpot in roomies. It also helped that I got in first to Austin and the hotel, went to Whole Foods and bought a pound of smoked brisket and half a chicken to heat up for dinner the first night. LOL! I set up a few paleo snacks so we could fuel as needed. 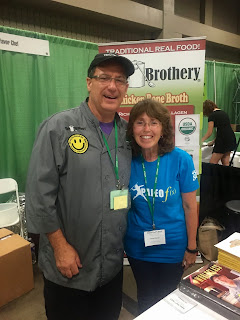 I met Chef Lance Roll, The Flavor Chef and drank the fantastic broth. Chef Lance makes his broth about 10 minutes away from where I live in San Diego County.  How fortunate!  We had a nice chat on the airport shuttle on the way home.


The Paleo Boss Lady!!!  Also a regional favorite (she's in the LA area).
Reversing some of the effects of her MS and sharing her story. Wow! I've followed her on social media for a while now and I was happy to meet her in person. Step 1, Manifest your life- Own your own sh*t. Indeed!!!!

Great to meet in person.

Oh I got to meet another person I correspond with in social media, Alea from Taste of Paleo. She was so, so sweet. She recognized me and totally fan girled me. Wow!!! Honored and I suspect that I'll meet Alea again. Especially since the Taste of Paleo is August 15, 2015 and is up in the OC and less than an hour away.  Road trip!!!!

I need to grab my Paleo "On the fence" friends and put them in the car for this event. I'm telling you, even though I have to be mindful of my food choices as a grain and processed sugar abstainer,  there's nothing like some great on plan,  Paleo food to get someone to try out a few recipes at home.

Okay What worked well for me:

1. Using the PaleoFx Room and Ride share
2. Planning and gathering a good food environment, starting in my hotel room
3. Taking time to seek out some of my favorite Paleo social media friends.


What didn't work so well:

1. The housing of my Life Proof Case iPhone steamed up due to heat outside and I lost a few photos. Live and learn in the hot Austin Texas weather.

Next up: "Famous Paleo People" and photos, and key learnings from the event
Posted by Karen at 6:47 AM 2 comments:

New food to abstain from at home, sigh, bacon!


Special Note: I'm going to talk about abstaining, bacon, and food rules for my own food template. I'm food sober today because I set up some of my own guidelines around what I put in my pie hole. If that is not your thing, please move on to another blog. Moderation and intuitive eating blogs are all the rage, abstaining blogs are harder to find. Thank you for understanding!!

Oh yeah!  In my post binge eating days, I'm still running into foods that still trigger me. Yeah, bacon! I ate bacon on my travel in April and May. While I seemed to be okay with it traveling, bacon is probably one of those foods I'll have occasionally, while traveling, but not at home.

I just want to overeat bacon at home, in a binge sort of way when I'm home.

Even after 4 years, heck, the rest of my life I'll have to deal with this urge to want to binge eat. So, the "bacon rules for 2015" are now in stone.


While traveling = bacon is okay

At home = Abstain from bacon

At least I know myself well. For me, setting in structure and rules around food is a good thing. It helps me be well instead of in the food addiction. And, that is a good thing.

What did not work in the past

1. Continuing to eat foods that trigger binge eating and make excuses why that is okay.

Alrighty!  Working on the Paleo FX 2015 recap posts. I should publish those later this week.
Posted by Karen at 5:53 AM 14 comments: 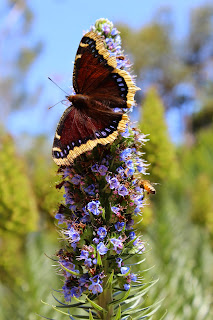 I'll be hanging out with my daughter today. Doing some fun things (beach, walking, eat out at a farm to table restaurant) and some required things (batch cooking , food shopping for next week, kitchen clean-up).

So glad to have addressed my binge eating and to be buying and cooking real foods (as opposed to processed) for both my daughter and myself. I even buy grain free for our cats.

The best gift I can give myself and my family is the gift of my whole presence as a mother- free from the binge cycle. Free from preventable migraines, joint pain, prolonged infections and colds. I stopped short of type 2 diabetes and cardiovascular disease.

Preventable. All those physical and emotional things. I can prevent by abstaining from grains and most sugars. I can show up to do Mom duties much more easily.

Part of being a Mom is modeling good health, teaching good cooking (not baking!) practices. What a gift I can pay forward to future generations.

Happy Mother's Day to all of you celebrating. If you are not, here's to a day where you honor mother like figures or even just the fact that you are taking care of yourself so you can live a full productive life. That's a huge gift to yourself and your community.

1. Buying and cooking in a Paleo/Primal style- grain free, low processed sugar.
2. Waking up with a clear, binge free (mostly) mind so I can show up emotionally to be a Mom.
3. Waking up not needing to be on a lot of meds for preventable diseases.
4. Giving back to the community by being physically present in ways I could not before.

What did not work in the past:

1. Using Mother's Day to eat sugary, grain filled and highly processed foods. Stacks of waffles and pancakes, and syrup. There was lots of cookie and muffin baking. Lots!
2. Waking up food seeking and planning the day around binge eating.
3. Waking up with migraines, achy joints, and weight gain.
4.  Wanting to plop on the couch and do nothing but eat skinny cow icecreams and watch junk TV.

Okay, to be clear, sometimes there is some junk TV, but required mom duties and service first. ;)
How is everyone celebrating today? 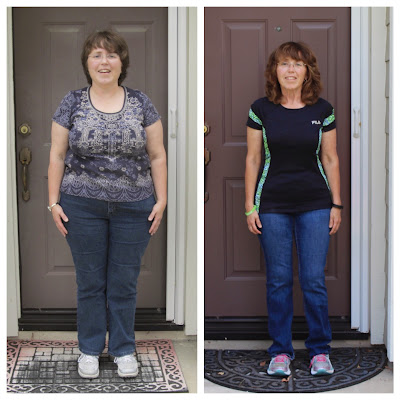 May 3, 2015- 4 years abstaining from most all processed sugar and gluten. That's a very cool celebration.

I've got before and after photos, weight graphs, and a very important celebration before I deep dive into PaleoFx 2015 topics. If that's not your thing, move along. There are lots of other blogs for you. 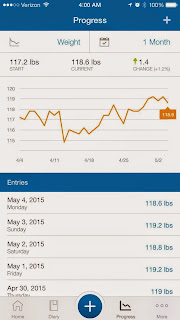 This month: Okay, I'm shifting and trending higher at the end of this month. Travel, bacon, and conventional salt will do that. It's no big deal and a normal weight pivot for long term weight maintenance for me.

I'm back to my home food template. A few weeks and my weight will settle into a few pounds lower, most likely.

I'm still food sober. 4 years of long term abstinence.  That's a lot of hard work, mindfulness, meals, working on good sleep habits, and doing what works for me and leaving the rest behind.

It's also a lot of prioritizing sleep,  where and how I spend time and money, working on habits, reading books, blogs, and getting and giving support. 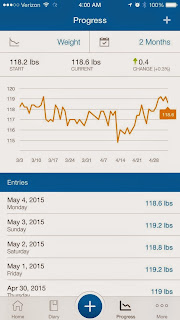 No, it's not my whole life, but I LOVE my new normal. Wouldn't go back for anything. Really. I can't think of any reason to go back to the mental and physical pain of the past. Nope. 40 years of compulsive overeating since the age of 6-46.  Now four years into the next 40 years.  4 years down, 36 more to live life on food sober terms.


What's working for me

2. Daily weighing. It keeps my slippery slope thinking at arm's length. For me it works. 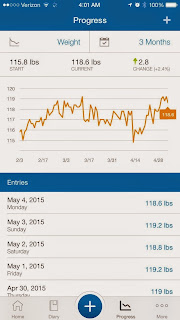 What didn't work in the past:

1. Moderating junk food at Weight Watchers and counting points, calorie counting. Worked in my 30's for weight loss, terrible for my binge eating and for long term weight maintenance

4. I cared what US News reported about weight loss programs and didn't think for myself.

So happy to be in this place in life. 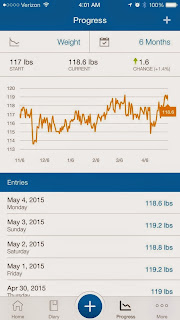 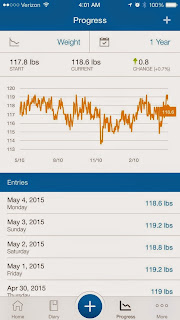 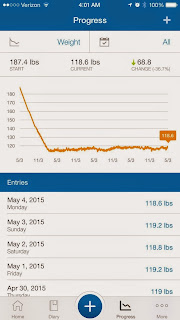 Back from PaleoFx 2015 -awesome trip - a few photos

So much fun. So many good lectures. I've got several blog posts lined up, but less time for blogging since I traveled for work immediately after the PaleoFx conference.

Also, today marks 4 years since I started abstaining from most processed sugars*  I still have a few squares of 85% Dark Chocolate per day, with good results.

As I was packing to go to PaleoFx 2015, I went to a regular grocery store. The candy lining the asile caught my eye. It really hit me that I've totally chosen a different life and different outcome for my health by stopping processed sugar and grains.

I choose this, indeed!!!

Some photos from the conference until I get back to regular life this week. 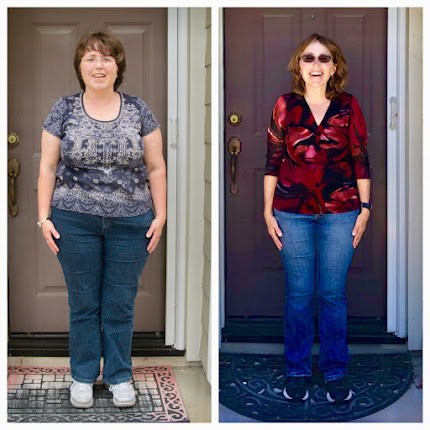 Promote Your Page Too

I have made every effort to insure that content is accurate, correct and current and am not liable for any unintentional errors. Links to other Websites and contacts have been carefully chosen, but do not imply endorsement and I am not responsible or liable for their information and contents.

Under no circumstances, shall the author and publisher be liable under any theory of recovery for any damages arising out of or in any manner connected with the use of information, services, or documents from the site.